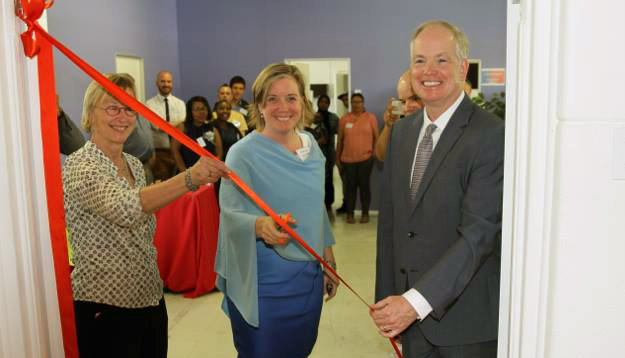 Men who have sex with men (MSM) are at particular risk of HIV infection and are often victims of discrimination and stigma. This fear of discrimination can prevent many individuals from seeking out treatment. Addressing this need, the Ivan Toms Centre for Men’s Health was established, providing HIV testing, counselling and treatment, and other sexual health services, in a safe space for this community for almost a decade.

The Centre has now relocated even closer to the places that this community has claimed as their own. Green Point has been synonymous with gay-friendly clubs, bars, restaurants and other venues and now this iconic healthcare Centre of Excellence will be located within walking distance to the “Queer District” and V&A Waterfront.

The Ivan Toms Centre for Men’s Health is named after a pioneering gay doctor who did much to fight the stigma and discrimination faced by the gay and bisexual community. Founded with US government support (PEPFAR and USAID), and in partnership with the Western Cape Department of Health (DoH), Anova Health Institute developed the Health4Men Initiative and Ivan Toms Centre, which was the first state-sector, MSM-focused sexual health and wellness clinic, to be established in Africa in 2009.

Since its inception, the Centre has catered to the sexual health needs of MSM, a highly vulnerable and often stigmatized group of people, offering them healthcare free from stigma and discrimination. More than 10 000 people have accessed treatment and care at the Centre.

Dr Kevin Rebe from the Centre describes Ivan Toms, the man, as follows: “He was a confident, sexy guy who didn’t just talk the talk…he was out there in the gay community. For him, it was about a community looking after itself. Our Ivan Toms Centre is the kind of gay men’s facility he wanted to achieve for this community.”

At the opening of the new premises on December 11, Clairissa Arendse, the Health4Men Programme Manager, said it was an honour to be part of such a momentous occasion. “After running a very successful clinic focusing on MSM at the Woodstock Community Health Centre (CHC) for nine years, the clinic has now moved to the Green Point CHC, a very strategic location in the gay village of Green Point.”

Virginia Blaser, US Consul General, who also attended the opening, gave an impassioned account of how Anova has for the past nine years worked in partnership with the DoH building competence of health facilities and medical staff to provide health services to MSM and transgender communities. She said: “It gives me great hope to see the continued collaborative efforts between our two countries. We will continue to keep our focus and collective efforts on combatting this disease. And we will, along the way, acknowledge the many efforts of so many who have through hard work, dedication, collaboration, and partnership helped bring us closer to controlling the HIV epidemic.”