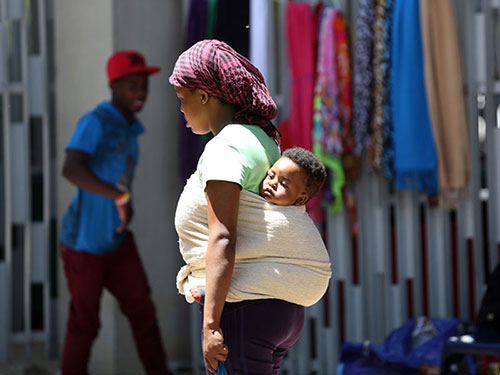 This Women's Month we shine a spotlight on the elimination of mother-to-child transmission (eMTCT) of HIV and the amazing work being done by our team in this area. We interviewed our Tirisanong team in Soweto on our successful eMTCT programme.

The eMTCT programme has successfully prevented the transmission of HIV to many babies since 2001. What are some of the latest statistics and metrics around this?

According to the latest data from Anova supported sub- districts in Johannesburg; In 2016, 18874 infants (0-10 weeks) were tested for HIV, with only 194 testing positive, the transmission rate was around 1%. This is a huge achievement.

What is our policy (national)/ what do we support - regarding breastfeeding and HIV-positive mothers?

Anova supports the Department of Health's policy. All women, regardless of HIV status are encouraged to exclusively breastfeed for six months (this means no solids, no formula should be given to the child. After six months, solids/complementary feeds can be introduced. For babies born to HIV-positive mothers, they should be given infant HIV prophylaxis at birth to prevent transmission of HIV from mother to child. Breastfeeding mothers should adhere to ARVs, engage in safe sex and have their blood viral load monitored every three months. All of these are aimed at making breastfeeding in HIV-positive women safe for their babies.

For all children born to HIV-positive women, HIV testing should be done at birth, ten weeks, six weeks after the cessation of breastfeeding, and 18 months to exclude HIV infection (or anytime if there’s clinical reason to test for HIV).

What are still some of the biggest challenges that we face in making this programme a success?

According to HIV management guidelines, pregnant and breastfeeding women on antiretrovirals (ARVs) should have a viral load (VL) test done every three months until the cessation of breastfeeding. In non-pregnant women, VL monitoring is done at 6 and 12 months after starting antiretroviral treatment (ART), and annually after that. Failure to monitor VL in pregnancy and breastfeeding may lead to transmission of HIV to the baby either during pregnancy or breastfeeding if the mother’s VL is high.

Have there been any interesting or unusual findings or developments in the eMTCT programme roll-out recently?

Yes. In June 2017 the Department of Health (DoH) revised the infant feeding policy, recommending that the duration of breastfeeding for an HIV-positive woman and HIV-negative women should be the same (2 years). Previous policy had recommended breastfeeding until the baby was a one year old in HIV-positive women. We are supporting this as Anova and are ensuring that patients get adherence support and regular VL monitoring to make breastfeeding safe.

We had a guideline update in 2015, which recommended frequent retesting for HIV during pregnancy, labour/delivery and post-natal period, and this has been implemented well in the facilities we support. With extensive support and mentoring all women who test positive are initiated on ART at antenatal care (ANC) clinics, and the numbers initiated on ART has increased over the years. In 2014 it was at 84%, 2015 at 91% and in 2016 improved to 96%.

We have supported the roll-out of birth testing for all HIV exposed infants in the delivery units since the guideline change in 2015, the uptake (of Birth HIV testing for all babies born to HIV-positive women) in 2015 was around 24% and with intensive support from Anova the uptake improved to 96% in 2016.

We are constantly monitoring and looking at why we still have infants who test HIV-positive. From the recent analysis, we have found that most women who had positive children had presented to antenatal care at some stage during their pregnancy and were on treatment, which raises a grave concern about adherence. As Anova we are supporting the District and facilities to ensure there is regular viral monitoring during pregnancy and breastfeeding. We have developed posters and algorithms to remind staff about the importance of viral load monitoring, and to educate patients about the importance of the VL test. We are currently supporting the roll-out of the government’s eMTCT connect and tracking and monitoring the use and implementation of the 18 -month barometer.

How do we intend to expand on this programme?

Our focus is to work at improving community knowledge and understanding of the programme. We have developed IEC material educating communities about the importance of booking early for ANC. We also want to support women to stay on treatment, so that they remain virally suppressed. Infant tracking and follow-up need to be intensified.

What role does eMTCT play (in your opinion) in the lives and well-being of women and children in general in the SA landscape?

It plays a huge role; through eMTCT women are put on lifelong treatment, and they become healthy and live longer, the country has fewer orphans. Mothers are there to work and look after their children. These are young women who are economically productive. For children, fewer children get the virus, and there is follow up and guidance on how to ensure the children remain negative. The maternal and infant mortality rates decline.

What would you like society to be more aware of when it comes to the work that you do?

Anova’s support to the DoH is very extensive; our teams are part of the eMTCT working group at Provincial and District level. We provide extensive training, mentoring and support to facility staff in the clinics. We assist in distributing the latest information/policies/guidelines to clinics. We support visits to ensure there is a good understanding and implementation of the guidelines. The team has extensive expertise in maternal and child health.

What is it about this programme that you are passionate about?

What do you hope will happen in the future?

There will be more planned pregnancies, women will book early, Nurses will be able to manage HIV-infected and uninfected pregnant women, there will be processes in place to follow up and support both HIV-negative and HIV-positive women. For women on treatment, there will be good adherence, and they will be virally suppressed. More understanding of infant testing and the importance of follow up care. Men being more supportive and involved.

How can people help you to make the programme more successful?

By understanding the aims and benefits of this programme. Encourage everyone to know their HIV status and test for HIV at least once a year (if previously HIV-negative). Encourage women to book early for antenatal care. Women who have undergone or are undergoing this programme are to get more support at the facility and community level. Communities to learn more about infant feeding and breastfeeding and support women throughout pregnancy and breastfeeding. Those with success stories to empower others. Communities and the Department of Health to work hand in hand.

Do you have a message for women and children that you would like to share this month?

We wish all women a Happy Women’s Month and remind them to go for regular screenings for communicable and non-communicable diseases.